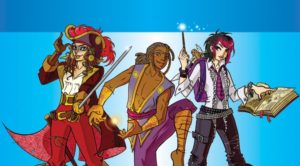 For those uninitiated to the world of role playing games, getting started can be a little intimidating. Some people might only know of Dungeons and Dragons – but there are actually a wide variety of RPG systems, and they can be used with all kinds of characters and universes. We think that there are a lot of people who would love tabletop RPGs if they gave them a shot, so we want to make the introduction process a little easier!

At 1:00 PM on Saturday, September 16th we’ll be hosting an “Intro to RPGs” session with our friend Stephen Chast. We’ll play a game in the universe of “It’s Not My Fault.” This character and situation generator places you and your friends in increasingly crazy and perilous situations, all blaming each other. We can’t wait to see if art imitates life!

The system here is Fate Accelerated, a condensed version of Fate Core. FATE focuses more on role-playing and storytelling, rather than being a numbers-driven system. It’s easy to understand and allows for a quicker game than the full version, so it’s great as a less intimidating intro for new players – but it’s still a fun one-shot for experienced players.

This event is sign up only with a five person max, so message, email, or call us soon to save your spot – first come, first served.