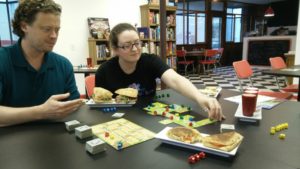 Carcassonne! One of the modern classics. With straightforward rules and simple expansions, it becomes a gateway for nearly every new gamer. The wealth of strategies keeps most coming back for more.

Carcassonne, like last week’s focus, Qwirkle, is a tile-laying game. Unlike Qwirkle, there is more to the matching than just color or shape. You are literally building the cities, roads, monasteries, and farms surrounding medieval Carcassonne, in southern France, and then laying claim to them by placing meeples.

By matching up specific elements on randomly-drawn tiles, you expand your area of influence and gain points: when the tiles run out, the game is over, and points are tallied. The version we have in the cafe also includes both the River and the Abbots & Gardens expansions, which adds an element of complexity to the base game. Both are optional expansions, and we usually recommend leaving them to the side until new gamers are comfortable with the core game.

We played it earlier this week with a group of four, but it plays just as well with two or three. It’s a core part of most game collections because it appeals to most gamers – the small amount of luck in drawing tiles and the moderate amount of strategy in placing the tiles makes for a versatile and ever-changing game.

The story is now a bit of gamer lore, but meeples have become a common representation of gaming – we even have one in our logo!

(P.S. Did you notice the shake shots in that top photo? They’re live, and have been described as “addictive,” amongst other words. Come try one and let us know what you think!)