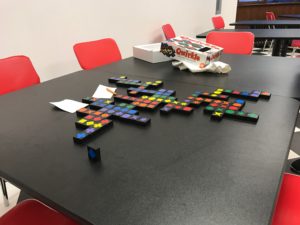 Qwirkle has been written up numerous times for how easy a game it can be. And it is one of my favorite gateways – it tends to be one of my primary go-tos when someone asks “what should I try?”

Part of that is because it has easy, familiar mechanics, such as those found in Scrabble and Dominos. It’s a tile-laying game, where each tile has only two variables: color and shape. By creating a row of one matching variable on each turn, you create a colorful, textured game board that grows as you play.

The rules: Each player draws six tiles from an opaque bag, and sets them up in such a way so as to hide them from the rest of the table. From those six tiles, the player is trying to build a line of either all the same color (different shapes) or all the same shape (different colors). Within a line, only one of the variables is repeated – the other must be all different. Scoring is done after each line is placed, and is the sum of the tiles aggregated in ALL rows. If a line of six is either placed or completed, the player doing so scores an extra six points. This is called a Qwirkle.

Example: Sarah draws six tiles. She can make a row of four blue, but two of those blue tiles are diamonds. So she can only make a row of three. Sarah scores three points. Jacob has five diamond tiles, in four colors – none of which are blue! So he can lay down the four distinct tiles perpendicular to Sarah’s row, meeting at the blue diamond that she laid down on her turn. Jacob scores five points. Mariam has the last available color for the row of diamonds, and can create a new, perpendicular row of three, expanding down from the end of the row of diamonds – she has finished the row of six, which scores her a Qwirkle (an extra six points) as well as creating a new row of three, for a total of fifteen points. After placing tiles, each player draws tiles from the bag until they have six, and play continues. The game ends when the bag is empty and one player has placed all their tiles. The first to do so gains an extra six points.

That row of six, finished by Mariam, is now complete. Rows can be built perpendicular to it, but no tiles can be added on the end. This provides a chance for some interesting strategies in blocking your opponents and setting up future Qwirkles. On Tuesday night, we pulled it out and played a not-so-quick game. With two experienced players and one new player, it became an exercise in pointing out possible strategies and looking at the board in a different way. The photo above was our final layout: this is why we have oversized tables!

The replayability on this game is very high. It’s absolutely a modern classic, and great for families as well as small groups. Happy gaming!